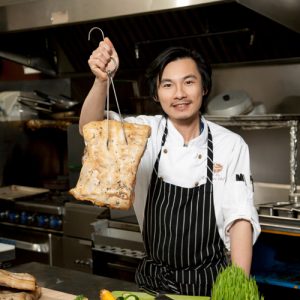 With over 20 years of extensive culinary experience in some of the most renowned kitchens in the world, Chef Ken brings a diverse blend of multicultural flavors to our table. His passion for food and cooking began in his very young age. He moved to Canada with his parents in 1996 and as his passion for food grew stronger he went back to Hong Kong and China to learn from the master chefs in the finest Chinese restaurants for two years. When he returned to Canada, he went on to study Culinary Art at Vancouver Community College where he developed his own style and flair. He graduated top of his class and moved his career way up through the ranks to Sous Chefs and Executive Chefs in some of Vancouver’s finest establishments, including Morgan Creek Golf Course, Season’s in the Park Restaurant, Arbutus Club, Delta Vancouver Airport Hotel, Joe Fortes Seafood & Chop House, Tapenade Bistro, Delta Hotel Vancouver Suites, Westin Grand Hotel, Vancouver Convention Center, Hilton Hotel Metrotown, Brock House, Riverway Golf Club, Richmond Olympic Oval.

Chef Ken won several gold medals in regional and provincial cooking competitions, including the Grand Salon Culinaire, the B.C. Hot Competition, Eat Vancouver Competition, the B.C. Chefs’ Association Karl Schier Competitions, and the Salmon Fund Rise Competition. He also has been invited as one of the celebrity judges at the Disaster Chef contest show that was broadcast on TV.

Chef Ken always finds inspirations in the surrounding environment. His philosophy towards food is to use indigenous and local fresh ingredients, with the classics and modern technique from around the world to maximize the flavors from the ingredients, and being creative and innovative with his dishes.

Foodies On Board is the culmination of a lifelong dream for the chef who has cooked in some of Vancouver’s most beloved restaurants and hotels. It aims to create a comfort dining spot where you can enjoy your breakfast all day and you can grab some made in house high quality stock, sauces, dressing to stock up your own pantry.

At Foodies On Board, Chef Ken’s skill for creating delicious market-driven dishes, with unexpected but incredibly pleasing flavor combinations, is on full display.

Foodies On Board’s ever changing weekly feature menu is driven by the seasons and the availability of ingredients. We work closely with farmers and farm cooperatives to obtain the freshest possible items for our menu. We believe this strengthens the local economy and the environment. When ingredients are not locally available, we procure from reputable sources where the product has been harvested with the environment, sustainability, and economic fairness in mind.

Click the icon to add to your Google calendar and receive any updates.

Use this url to add to your iCal calendar.
https://bit.ly/3k17dOq

Press the icon to download the complete program schedule.

For Early Announcements And More

For Early Announcements And More